We are returning to back carries this month with a bang! Ruck and it’s variations are popular carries for those newer to back carries, but they are also well loved among those with more experience.  All around, these are great back carries, and some come with a little extra support if it’s needed.

The Rucksack carry is a great carry for those new to back carries with a woven because it is simple and fast (the more you do it, the faster you become). It starts with a ruck pass, which is over both legs of the child and over both shoulders of the wearer.  Bunched passes are then pulled back over one leg of the child and under the other with both passes ending in front to tie off.  The Rucksack carry is typically done with a base size wrap, or base -1.

The Ruck Tied Under Bum (or Ruck TUB) and the Ruck Tied at Shoulder (or Ruck TAS) are variations of the Rucksack carry that can be done with shorter wraps, typically sizes 2, 3, and 4 woven wraps work great for these. The Ruck TUB is essentially the Rucksack but instead of the bunched passes crossing over the child’s legs and then under to tie off in front, the bunched passes pass over the child’s legs and then tie off in a secure double knot under the child’s bum.

In Ruck TAS the carry starts somewhat off center and allows the wearer to work with only one side of the wrap instead of both.  After making the seat and tightening strand by strand, the longer tail is again bunched and then passed over both legs coming up to the front under the wearer’s arm and tying at the shoulder in a secure double knot, slip knot, or if there is enough length in the tails a few other tie off variations can be used.

As children get older and heavier reinforcing passes can add to the comfort of both child and wearer. The Reinforced Ruck may be the version for you if you feel extra support is needed, or if you just like extra support no matter what.  This version of the Rucksack does require the wearer’s base size wrap or longer.  For this carry, instead of bunched passes, we have spread passes which is where you will get the extra support.

Lastly the Reinforced Rear Rebozo Rucksack (RRRR) is another variation that can be done with a shorter wrap.  Depending on the wearer and the size of the child a size 2 woven wrap to a size 4 woven wrap can work wonderfully for this carry. Like Ruck TAS this carry starts off center and the wearer works primarily with one side of the woven wrap. RRRR (or the Pirate carry) uses a rebozo pass instead of a cross pass, the rebozo pass is spread over the beginning ruck pass and is brought under the opposite arm to tie at shoulder or in a chestbelt variation.

As with all wrap carries, importance is placed on creating a nice, deep seat for baby, with baby’s legs being in a good M position (knees above bum) and fabric supporting under the legs from knee to knee.

The hardest part about the Ruck carry and it’s variations is maintaining a good, deep seat for your child.  Sometimes the seat is popped due to over tightening the bottom rail, and other times t is popped by a quick, leg straightening child.  Either way you’ll want to make sure to keep that deep seat with knee to knee support as you finish the carry.

Some of the tie off variations you may see in the linked videos below are: Candy Cane Chest Belt (CCCB), Tibetan tie off, Knotless, and the slipknot.

If you are a beginner with woven wraps, we recommend that your child be approximately 6 months old, with good neck control/head support, and able to sit before attempting ANY back carry.

Stretchy wraps (such as the Moby, Boba Wrap, DIY knit wraps, etc) are not designed for the carries described in this Carry of the Month and should NOT be used for back carries.
These video tutorials and more can also be found on our Pinterest: https://www.pinterest.com/BWITucson/cotm-7-rucksack-carry-variations/ 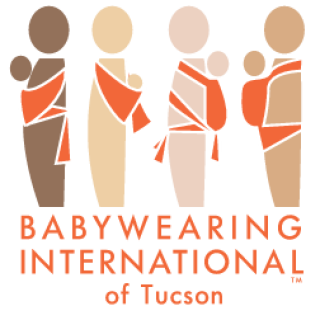